Ego goes Berserk and devours the target of Sora's anger. Ego's mouth is split into four parts and the target is bitten cleanly.[1]

Ego's Bersek is linked to Sora's feelings and is triggered by her anger so Sora can't use this skill on command.[1]

When this skill is activated, Sora's red eyes glow possibly from her rage.[1]

This is Ego's strongest attack at the time of the Siege Round.

The Combat Tournament - The Siege Round 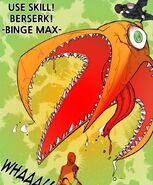 Ego going Berserk after Dark was killed by Managerpark38 (Episode 82) 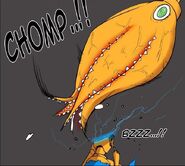