"I just want to focus on our guild now and cherish every moment of it."

Unfortunately, she never achieved her goal as both her and Zara Guild were framed for using Nightmare by Giga. She was captured and the guild was disbanded soon after.

In the real world, she was suffering from an unknown disease which killed her sometime after her character was banned from Lucid Adventure.

Armes infected by the Nightmare Bug

Armes captured by Giga
Add a photo to this gallery 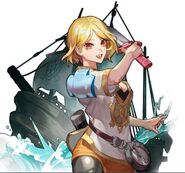 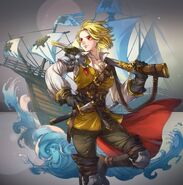 To HCLW she was a person that actually helped and cared for him, with Armes watching over him. Finding joy in working together with him, but also teasing him many times. Even putting him in humiliating events such as revealing his tears when she saved him, telling the others about it. When she 'returns' during the Evil Dragin's Trial, she attempts to force Ethan in staying with her. She loses eventually though and acknowledges he has changed for the better, and is glad he had new friends. Hoping that HCLW will accomplish her dream in her stead. During a flashback with Master Swordsman, she admits that she might go out with Ethan, but would only think about it if he confesses, having been aware of his feelings for her. Master swoardsman hints that she could have the same feelings for hclw but it'll be hard to go out with him since shes dying

Despite hiding her power from people, Armes was one of the strongest players in Lucid Adventure. She was able to best a The Best Swordsman that was the #3 Ranker at the time and even countered his Moonlight Slash head-on.[1]

During the Zara Guild Arc, she was able to defeat multiple Giga Security Team members and even managed to cut off Nathan Han's left arm. She was fully confident that she could defeat the Giga Guild Security Team single-handedly and looked to have the upper hand till she was blackmailed into stopping her attacks by Nathan Han.[2]

Overwhelming Speed: One of Armes most exceptional traits was her speed. She was so fast that the #3 Ranked Master Swordsman could not keep up with her.[1] During the Zara Guild's infiltration of Cobalt Castle, she moved so fast that the Cobalt Castle Magic Soldiers thought she teleported.[3] She was able to dodge multiple Giga Guild Security Team Restraining Orb's immobilization magic at point blank range, although it should be noted that she was under Nightmare status which boosted her stats.[2]

Armes appeared to favour melee combat using her short sword. She uses her exceptional speed to close the gap between herself and the target as well as to evade attacks. She uses Pioneer Slash as her main offensive attack. As noted by The Best Swordsman, she rarely uses her Personal Attribute, unless she is in trouble.

During the early stages of Lucid Adventure, Armes was one of the Ten Beta Testers.[2]

At some point she got an unknown disease that was killing her.[4]

She wasnt a normal beta player that one may imagine. Her beat testing was simply an experiment with mostly people who had major illnesses and on their deathbeds

Immediately after Armes disappeared from Lucid Adventure, Zara Guild went out of control without her leadership. After a while, a lot of guild members left the guild. Some of the former Zara Guild member that included Constant joined Giga as it was an opportunity they couldn't pass and they had to move on.

Retrieved from "https://hardcorelevelingwarrior.fandom.com/wiki/Armes?oldid=28851"
Community content is available under CC-BY-SA unless otherwise noted.