Deleted from the game by No Name

Season 2 Episode 12
Apple was a high ranker and was a part of Giga's Mythical Team. Her specific rank is unknown but she is one of the high rankers alongside Heriach. She was challenged into an unofficial ranked match by Sora.[1]

During Giga's last stand, Apple was one of the Giga players that engaged Queen No Name. She was eventually defeated and deleted from the game by No Name, losing her memories of Lucid Adventure in the process.[2]

She has short hair, coloured red with a green streak to resemble an apple and its leaf. As her uniform, she wears a black jacket, grey shirt and black jeans. 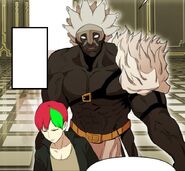 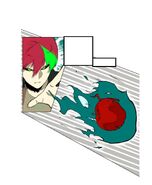 Apple comes off as an aloof individual and is only interested in completing her missions like the retrieval of the Divine Item although she was willing to abandon it when Light, the Vice President, told her off however her allegiance to Han Soo-Ah outweighed his orders.

When push comes to shove however, she is willing to fight against the Vice President, her superior, to accomplish her mission. Apple believes that those born with powerful personal attributes like hers are strong and that those who aren't part of the ranking system are weak. She is quite serious about Lucid Adventure as well and enjoyed playing alongside her fellow Giga players as they built the Giga Empire.[2]

Han Soo-Ah is Apple's superior and leader of Giga's Mythical Team. Apple seems to be quite proud of being one of the ten gods of Miss Soo-Ah's team. She is loyal enough to Han Soo-Ah and was willing to fight Giga's Vice President, Light, to complete the mission Miss Soo-Ah gave to her.

Apple and Heriach are fellow comrades under Miss Sua's Mythical Team. They were partners in the retrieval of the Divine Item and she took leadership in guiding them both in the dungeon. They are good comrades as Apple was comfortable enough to tell him to shut up.

Light is the Vice President of Giga. As such, he is Apple's superior albeit she was willing to fight against him when they encountered him in the Tower of Abstinence in order to accomplish the mission given to her by Miss Soo-Ah.

Apple acknowledges Dark as one of the Top Rankers and respects his power as she explained their situation to him.

Apple and Sora were enemies, Apple originally thought that Sora was weak because she was unranked and that her personal attribute "Taster" will never be able to defeat her divine personal attribute. She acknowledged Sora for being more tanky the rankers as she was still living after three shots of her attribute which usually killed Apple's targets in one shot. However, she is thoroughly shocked when Sora caught one of her most powerful attacks with her bare hands and was distraught, exclaiming that Sora wasn't even ranked and is a nobody.

Considered by Han Soo-Ah as her best rankers, alongside the powerful Heriach, Apple's power is assumingly similar to the strength that the Herculean Ranker possesses.[3]

Apple's Personal Attribute is currently unknown. Secretary Kim attempts to read her attribute when Apple fights Sora, but because Apple's divine passive is at quite a high level, she is unable to.[1]

Her Personal Attribute is speculated to be related to Eris, the Greek goddess of strife. Eris is associated with the Golden Apple, which she uses to strike discord between Aphrodite, Hera and Athena, three other popular Greek goddesses. Other than that, Han Soo-Ah's mythical team seems to comprise of Greek Mythological Personal Attribute characters, for example, Heriach represents Hercules.

At some point in the past, Apple rose up to become one of the Top 100 Rankers in Lucid Adventure.

She then joined Han Soo-Ah's Giga Mythical Division, became one of its aces and helped build the Giga Empire.

Heriach met with Dark's party and both teams almost engaged in combat until Apple intervened by explaining the current situation to them. After Light's party arrival, The Dungeon Keeper keeper is summoned once the conditions of the three teams has been met. The Dungeon Keeper proceeds to explain the rules of the dungeon and opens three separate doorways for each team to go through. After the explanation, Apple and Heriach go through the red colored doorway first with the former complains whether they'll fight the Vice President, Light. She and Heriach then await in the last floor with Light's party, waiting for Dark's party to arrive.

After Dark's party arrived, the Dungeon Keeper began their trial and teleported them into another dimension within the dungeon. Apple makes note of the God of War image but is reminded by Heriach of more important matters such as Dark and Light. Apple implies returning to Han Soo-Ah to which Heriach questions, the former replies that there is not much for them to do other than fight the Vice President. Coincidently, Light and his party arrived to their location.