Advent of Angels is the ultimate skill of the Holy Shooter, Tempest.

The skill makes Holy Warriors come down to the world. Up to 5 can be summoned.[1]

It seems like Tempest is praying whilst summoning the Holy warriors.

Tempest arms the Angels with Divine Weapons from God's Armory.[2]

The Angels seem to take on Tempest class characteristics as they can use guns and grenades.

It seems like there is a time limit for the skill as the Angels disappeared after a while.[2]

It was used by Tempest during the fight with Octonash. The 5 Angels wielded the weapons from God's Armory. The angels managed to destroy Octonash's shield with divine weapons containing Holy Power.[2] 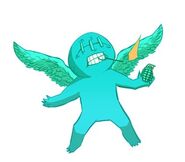 Retrieved from "https://hardcorelevelingwarrior.fandom.com/wiki/Advent_of_Angels?oldid=9783"
Community content is available under CC-BY-SA unless otherwise noted.