???, speculated to be Eris, is Apple's mythical personal attribute. Her divine passive, which supposedly hides her abilities, is at quite a high level.[1]

A mythic personal attribute based on a mythological figure who is well known for retribution, punishment, and apples.

High Class Magic: Apple is able to cast multiple large high class magic in the shape of apples coated in her bluish green aura. Her magic is capable of blowing away a fortress.

Guaranteed Hits: Any attack on Apple's conceptual magic becomes a bullet in the name of vengeance and allows her to hit her target 100% of the time, marking the target with a black skull with scythes by its side. 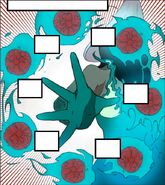 although Eris is most likely as it is associated with the apple and is part of Greek mythology.